My first overnight pig roast vigil was well underway, and the doubts had started to creep in. The tail lights of the early evening crew, headed home to sleep in their beds, faded from the church parking lot around 11 pm and I thought: “I’m going to ‘sleep.’

in a tent tonight, 20 yards from Georgia Avenue, with a 250-pound pig lying between two chain-link gates, suspended over a charcoal fire, right outside my tent?And we’ve got to flip the pig and baste it with a mop every half hour, all through the night?” And, later: “Is that Virgil or Peter Curtin who’s snoring somewhere out there in the darkness? Whose idea was this, anyway?” But the next afternoon, standing contentedly – if not a bit woozy from lack of sleep — amid a crowd of smiling neighbors and friends enjoying some delicious barbecue, the doubts had long since faded away.

Faith, to me, means overcoming doubt by believing in something greater, trusting in the Christian values and community found in a place like Grace Church. The pig roast was John Mahler’s idea a couple of years ago, and what a great idea it has turned out to be. Saturday, August 18, is the third annual Grace Church Pig Roast and Community Day. All are invited, all are welcome to participate, and all are encouraged to spread the word in the nearby community. For, without a doubt, this has become one of those wonderful Grace fellowship and outreach opportunities that we want everyone to share.

Here’s the story behind the pig roast, and a little window into what goes on behind the scenes. Before coming to Grace, John spent a number of years at a church in Georgia whose men’s group did an annual pig roast. Two years ago, he suggested that Grace’s newly formed Men’s Group might want to give it a try. Barbecued pig is a bit more common in the South than it is here in the northern suburbs of the Capitol of the Union. But we do live below the Mason-Dixon Line. And Grace is on Georgia Avenue, after all, down which the Confederate Army marched, southward, 148 years ago on their way to attack Washington. Most of all, we had an eager group of men looking to give something back to the community, and to have some fun in the process. So in August 2010, the first annual Grace Church Pig Roast and Community Day was launched.

John not only provided the vision, he provided the know-how and the do-how that first year. And ever since. Along with his son, Jonathon, who was home for a stint before joining the Marines, John ordered the pig and the supplies, gently supervised all the work, and stayed up all night monitoring it and doing the work when others had nodded off. Then, the next day, he was there to help set up the tables, bring the baked beans, the watermelon, the cole slaw, the lemonade, everything, out from the undercroft. In short, there is a lot of preparation involved in a pig roast, and John has been there for it all.

Other than ordering and procuring the supplies, the preparation begins Friday evening when a rectangular fire pit, about six feet by three feet, two feet deep, is dug in the lawn outside Grace House. A safe distance from Grace House, because the Fire Department keeps an eye on these things, as we learned last year when they came by in the night and almost shut us down. The first year, an eager group began digging on the other side of the driveway on the north side of Grace House. Turns out the property line is a little ill-defined and we were digging on the property of our near-neighbor behind the hedges. Oops. Not a great way to begin reaching out to the community. But we learned and moved on.

You also need a separate area to build a wood fire, which must constantly be re- supplied, and from which you shovel the coals to place under the pig. You don’t want direct flame, but a constant supply of hot charcoal heat. Shoveling charcoal on a hot August night makes you appreciate what anyone who stoked the fires of a steam engine must have gone through. All night, the fire must be fed and charcoals moved. And every half hour you need two strong people to grab either end of the gates and flip the pig so it doesn’t get over done on one side. Every time you flip, you generously baste the pig with a North Carolina-style vinegar-based mixture, slopping it on with a fresh mop bought clean for the occasion.

A lot of hard work, but also a lot of fun. Men of all ages and types, sitting around a fire. Swapping stories about where they grew up. What their kids are doing. A lot of jokes. Some music. A few cold beers. And as the night goes on and the traffic quiets, a real sense that we’re in this together, and this is something special. Something Graceful. And last year, thankfully, all that testosterone sloshing around was diluted by the Curtin girls who pitched a tent with their Dad and helped keep vigil through the long night.

The night of interrupted sleep, fire stoking, and pig flipping and basting, is rewarded in the wee hours when the various cuts of meat start to split and the wonderful aroma of wood-smoked barbecue wafts through the campsite. After the sun rises, tents are struck, tables are set up, and side dishes hauled out to the parking lot; some go home to catch up on a little sleep before the mid-day dining starts. Then folks start trickling in and the campsite becomes a community picnic area. The Pennyworth Shop sets up some racks outside. The first year we had a shredding truck set up so people could recycle old papers lying around their house. Little kids are running around and neighbors talking, some ofwhom we’ve just met.

Then we give thanks. For the animal, like the lamb and oxen of all those Old Testament stories, sacrificed for human nourishment and fellowship. For the many hands that helped prepare the feast. For the community that we share, which has joined us to help us celebrate. And for the God whose presence is in all of this. Fellowship and outreach. A casual, laid-back way to celebrate the end of the summer and look forward to the church year ahead of us. Grace at its best.

The chefs have to eat too! 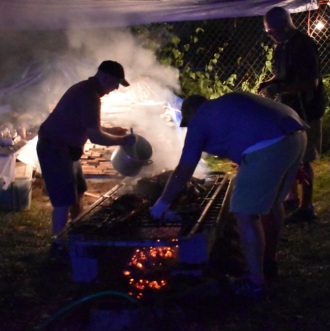 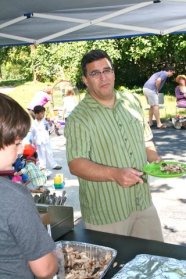 That pig’s not going to flip itself! 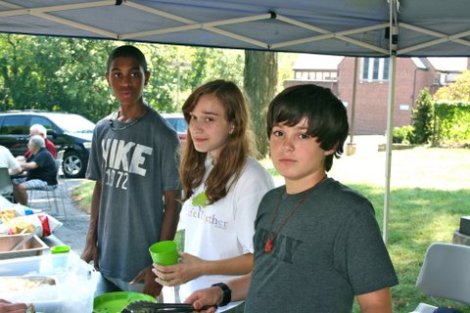 The youth are SO happy to be helping!

AUGUST 26:
Help us cook and hang out from 6:00pm till as late as you want!
Loading Comments...